Mobilising ideas for the EU's future

The European Union is engaged in a large-scale debate on its future nature and direction. The role and importance of theoretically informed and empirically grounded research in that process is essential, as was made very clear at EU3D’s opening conference in Rome. 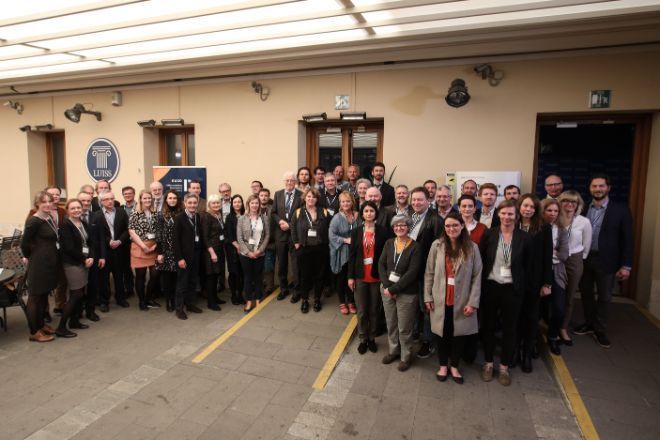 EU3D project participants at the opening conference at Luiss University.

The EU3D opening conference that took place at LUISS University in Rome on 11-12 April 2019 gathered over 50 participants for two days of intensive discussions. The event marked the start of a four-year quest to find out how much and what type of differentiation is sustainable and legitimate in Europe. Close cooperation and a good ‘team spirit’ are essential ingredients for approaching this ambitious goal.

Scientific coordinator John Erik Fossum of ARENA Centre for European Studies was particularly pleased with the many fruitful discussions and the contributions of all participants, not least from the project’s high-level Advisory Board.

'The active participation of the conference participants in the discussions testifies to the relevance and importance of the project. EU3D deals with one of the EU’s most fundamental challenges, namely the role and risks of political differentiation for ensuring political stability and legitimacy in an increasingly contested EU',  said Fossum when looking back at the conference.

At the conference, the different aspects of differentiation that will be studied by EU3D over the next four years were discussed. An important task for the multi-disciplinary group of researchers is to explore and evaluate different reform proposals to deal with the EU’s current challenges. Another task is to reveal public opinion of such reform proposals.

Dirk Leuffen, Professor at the University of Konstanz and one of the lead researchers on public opinions in the project explained that EU reforms need scientific input because there is a need to establish whether reforms are legitimate and can be socially accepted.

EU3D will not only look at differentiation within the Union, but also at its differentiated relationships with EU non-members, both within and outside Europe. Sabine Saurugger from Sciences Po Grenoble is one of the lead researchers on external differentiation.

EU3D deals with one of the EU’s most fundamental challenges, namely the role and risks of political differentiation for ensuring political stability and legitimacy in an increasingly contested EU.

'One aspect is the external non-members of the EU, such as Central and Southern European states. Another aspect is a comparative study of the EU and other regional organisations and federal systems that are differentiated', Saurugger illustrated.

Mobilising ideas for the future

In presenting plans for their research, project members were challenged by the audience, for example when it comes to defining the theoretical concepts, and ensuring that the project leads to recommendations that are policy relevant.

'The project can be very useful in mobilising ideas for the future and in producing valuable empirical research, which can be used by European policy makers', said Francis Brendan Jacobs, who has almost four decades of experience working for the European Parliament. He underlined that for this to happen, the project’s research must be disseminated throughout Europe.

Reaching out to policy stakeholders is not an easy task. Jacobs provided useful insights on how this can be done. University of Oxford Professor Kalypso Nicolaïdis has extensive knowledge of Brexit and the relationship between differentiation and democracy. At the opening conference, she reflected on potential policy impacts based on her long-standing experience, most notably as a member of the Gonzales reflection group (2008-2010), which was convened by the European Council to explore how the EU could respond to its long-term challenges. She underlined the need for critically-constructive recommendations to reach out to citizens and policy makers.

EU3D will seek to maximise its policy impact through a set of policy dialogues and public events.

The conference culminated with a public panel debate on the EU’s future patterns of differentiation, dominance and democracy. The high-level speakers, who are all members of the project’s Advisory Board, included former Italian Prime Minister and Vice-President of the European Convention Giuliano Amato, Member of the European Parliament Marian Harkin, former Director General of the EU Council’s Legal Service Jean-Claude Piris as well as Associate Professor at Columbia University Turkuler Isiksel and former EUI president Yves Mény.

The panellists addressed some of Europe’s challenges and possible ways for dealing with them. Piris emphasised that the current treaties offer enough flexibility for member states not willing to participate, for instance in Schengen. He warned against excessive differentiation and argued that in the current political climate in the EU, it is important to work to ensure coherence. Amato underlined the importance of mutual recognition as a means to foster integration. More authority was needed to prevent fragmentation, but he did not see a two-speed Europe as the solution.

In the current political climate, it is not time to go ahead with strong and deep differentiation in the EU.

Harkin argued that the reforms put in place by the EU need to be grounded in dialogues with citizens.

'We need to engage people; only then will they feel an ownership to the EU. We have to continue to explain to the citizens of Europe what the EU is, what it does and why it matters', she said.