GLOBSEC side-event: The EU's future role on the global stage

On 3 June, EU3D results were presented at a side-event of the leading security conference GLOBSEC 2022 Bratislava Forum. It serves as a gathering of representatives of governments, private sector actors and the think-tank community from around the globe. 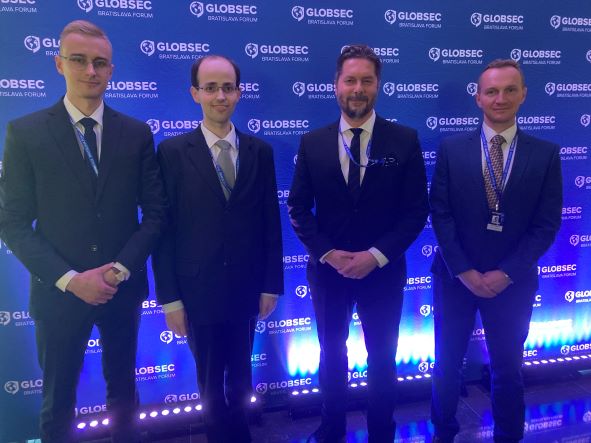 On 3 June 2022, two studies were presented as part of an EU3D side-event for invited participants at the GLOBSEC 2022 Bratislava Forum, a leading annual high-level security conference. The forum serves as a gathering of representatives of governments (including several presidents, prime ministers and foreign ministers), private sector actors and the think-tank community from around the globe. The EU and various facets in its governance are a regular theme and this year’s forum featured presentations by, for instance, several representatives of the European Commission including Ursula von der Leyen, Margrethe Vestager or Maroš Šefčovič.

GLOBSEC offers a unique platform for discussing research findings from the EU3D project. The roundtable 'The EU's future role on the global stage: are we ready for it?' included presentations by Jozef Bátora, Pavol Baboš, Max Steuer and Viliam Ostatník from the EU3D team at Comenius University.

In the first study entitled “Popular perceptions of the EU: Thought communities and pre-conditions for polity formation in a differentiated Union” Jozef Bátora and Pavol Baboš conducted an online questionnaire survey of 6,000 respondents in 6 member states (France, Germany, Italy, Poland, Hungary, Slovakia), while identifying the so-called "thought communities", i.e. groups of citizens who share ideological constructs on the basis of which they think about European integration and the Union in general.

Based on the methodology of relational class analysis (RCA) developed by organizational sociologist Amir Goldberg of Stanford University (who worked with the authors to develop the study methodology in an earlier pilot study), three thought communities were identified: "statists" perceiving the Union through the construct of the state; "pragmatists" separating in the perception of the Union, on the one hand, the practical (e.g. financial) benefits associated with membership and, on the other hand, the level of government; and "communitarians" who think of the Union mainly in the context of more abstract public goods in the form of peace or cooperation between states and with less emphasis on governance structures.

Among the authors' findings was a partial explanation for the paradox when voters in Poland and Hungary vote for the populist parties PiS and Fidesz, which promote an agenda against the liberal-democratic values ​​of the EU, while maintaining a long-term high level of support for EU membership. The majority of citizens in these countries perceive the Union pragmatically in terms of benefits and seem to be unaware that common European coordination and shared governance structures are needed to bring them about. It is also interesting that the constellation of thought communities in Slovakia are similar to those in France, Germany and Italy (i.e. all three communities present), while in Poland and Hungary the constellation is different (only statists and pragmatists were identified by RCA). Arguably, the long-term presence of populist governments also clearly has an impact on the perception of the Union among the population.

Different narratives about the EU

In the second presented study “Who Owns Sovereignty? Visegrád Four Eurosceptic Narratives on the Future of the European Union” Magdalena Góra, Viliam Ostatník, Max Steuer and Natália Timková-Rungis examined Eurosceptic discourses in the parliamentary debates of the Visegràd Group (V4) countries from 2015 to 2020. The analysis shows what narratives and terms about the EU are used these debates, in particular by members of the Eurosceptic parties. The results point to differences in the narratives about the Union between the Czech Republic and Slovakia on the one hand, and Poland and Hungary on the other. The analysis also shows how the Union's visions are becoming influential in this region, and thus what the prospects are for political support for the various reform proposals emerging at the Conference on the Future of Europe.

Findings from both studies generated a lively debate among the 23 side-event participants – most of whom were representatives of the European think-tank community as well as governments. Feedback from practitioners was also useful in fine-tuning some of the arguments as the authors are preparing the studies for submission to academic peer-reviewed journals.