The EU's difficult passage to risk-sharing in financial policy

Why is risk-sharing in EU financial policy so controversial and what are viable and legitimate models and options to overcome the conundrum? These questions were addressed by Sonja Puntscher Riekmann in a EU3D Lecture on 19 May 2021. 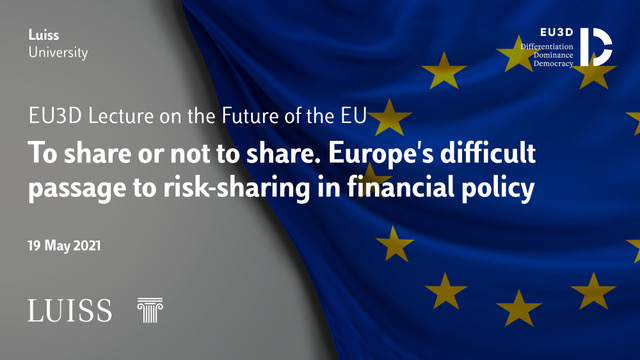 The lecture organised by LUISS University dealt with the concept of risk-sharing in financial policy at EU level, specifically how the attitude of member states towards risk-sharing has changed from the euro crisis to the Covid-19 pandemic. Risk-sharing is a key concept because it has been at the heart of the EU's measures to tackle both these crises and has the potential to radically alter the EU's integration of fiscal policy.

No common definition of risk

Risk-sharing is a controversial topic in the EU. Sonja Puntscher Riekmann explained that solidarity is a pre-condition for risk-sharing within a political community. The problem is that the EU is an inhomogeneous political system, made up of states that differ in many regards (political, legal, economical, cultural, etc.). As a result, member states usually neither share a common definition of risk nor do they interpret crises in the same way. Not surprisingly, then, member states may disagree on the very same need for some form risk-sharing, thus opposing it on grounds of moral hazard concerns.

Diversity and asymmetry in the EU have further implications on risk-sharing.

The paradox is that, although good insurance is best achieved under conditions of diversity (the larger and the more diverse the pool of insured, the better), insurance in terms of risk-sharing is politically very difficult to achieve within the Economic and Monetary Union (EMU). The euro crisis has shown that shocks may affect member states in an asymmetrical way. Therefore, the call for risk-sharing as a reaction against asymmetric crises may also differ. The call for risk-sharing is also affected by member states’ political and economic weight, their resulting bargaining power, and by the fear of member states with low deficit and debt to end up transferring money to ‘profligate’ member states (the ‘perennial North-South-divide’).

Sonja Puntscher Riekmann then reconstructed the EU’s reaction to the euro crisis and to the Covid-19 pandemic, where risk-sharing has been at the centre of the debate. During the euro crisis, risk-reduction or risk-prevention prevailed in terms of austerity measures. During the Covid-19 pandemic, fiscal rules have been temporarily suspended and some form of risk-sharing has taken place with the Commission’s borrowing power under Next Generation EU (NGEU). However, the overall approach to risk-sharing within the EMU has not changed: the no-bailout clause, the deficit and debt criteria, the commitment to a balance budget, etc. all epitomise the attempt to reduce risk at the level of individual member states in order to prevent negative externalities to the EU. These fiscal rules have not been very effective because in many cases they have not been enforced. As a result of all this, the Covid-19 pandemic has temporarily suspended the centrality of risk-reduction, but has not resulted in a shift of member states' attitude towards more permanent forms of risk-sharing.

New constellations during the Covid-19 pandemic

Risk-sharing is central in the EU integration process and is also closely linked to the topics studied in EU3D. Among member states with the same level of fiscal integration (i.e. member states that adopted the euro), the view on risk-sharing – and, thus, also the preference for (further) fiscal integration – differs significantly. During the euro crisis such differentiation was mainly North vs South (creditors vs debtors). During the Covid-19 pandemic, we witnessed the formation of new coalitions of countries not necessarily close in geographical terms but yet sharing the same preferences on new forms of risk-sharing (the ‘solidarity coalition’ of France, Italy and others, later joined by Germany) and reliance on traditional forms of risk-reduction (the ‘frugal four’ coalition:  Austria, Denmark, the Netherlands and Sweden). As for dominance, risk-reduction has prevailed over risk-sharing in the history of the EMU. This has paved the way for patterns of dominance of some member states (the creditor countries, less in need to perform austerity policies) over others (the debtor countries, which were not in a position to oppose austerity measures).

Risk-reduction has brought a predominant role of intergovernmental institutions. The Covid-19 pandemic might have slightly changed that, but in supranational institutions are not on an equal footing with intergovernmental ones in fiscal policy. Clearly, the marginalisation of the European Parliament and the technocratic/implementing role of the Commission might be problematic in democratic terms. The same holds true for the weaker role of national parliaments during a crisis. Italy has been advocating more risk-sharing since the euro crisis. It has done so also during the Covid-19 pandemic. At the same time, due to its high public debt, Italy mirrors the concern of those states which oppose risk-sharing.

The EU's Hamiltonian moment is yet to come

Puntcher Riekmann concluded the lecture by pointing to the fact that the debate on fiscal reform continues in terms of ‘piecemeal reform (Completion of Banking Union including EDIS and realization of Capital Market Union) vs major overhaul (mutualisation of debt, orderly debt restructuring, EU unemployment scheme, safe assets, Eurobonds), and finally fiscal centralisation/Finance Minister with taxing and spending power’. However, some of these issues imply treaty changes, but this will not be possible in the foreseeable future. Most likely, these issues will also not be part of the ongoing Conference on the Future of Europe. This is why Puntscher Riekmann concluded that the EU’s Hamiltonian moment is probably yet to come.

By Tiziano Zgaga
E-mail this page
>
2021 > The EU's difficult passage to risk-sharing in financial policy
Twteam@eu3d.uio.no