Some of the differentiation we have witnessed in the EU post-crises have had negative democratic effects. This raises a number of questions about the relationship between differentiation, dominance and democracy, which were discussed by EU3D researchers at a workshop in Oslo in January 2020. 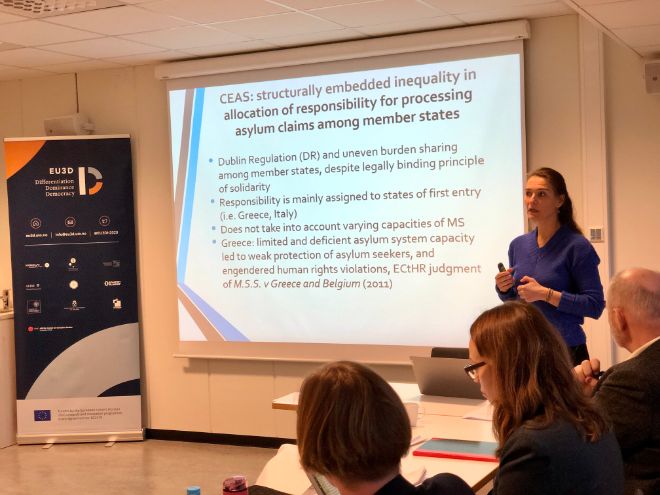 Some states push for European integration, some states hit the break and prefer to negotiate individual opt-outs, be it in EU treaties, in trade agreements, or in aspects of monetary or migration policy. Some analysts consider forms of differentiated status (opt-outs, derogations etc.) as simply necessary to do justice to the diversity of EU member states and their individual needs in different policy fields. Yet, differentiation is also about how the EU is structured, in territorial, functional and hierarchical terms. Some of the changes we have seen in the post-crises EU have had negative democratic effects, thus raising a number of questions worth investigating regarding the relationship between differentiation, dominance and democracy:

What does dominance in European politics mean and how is it manifested? What is the nature of the relationship between dominance and differentiation? Dominance and democracy are incompatible but can democracy be equated with non-domination? How can we use our knowledge to initiate democratic reform?

In order to develop answers to these questions, researchers gathered for a workshop at ARENA Centre for European Studies at the University of Oslo in January 2020. The overall mission: to further develop the analytical framework of the EU3D project on Differentiation, Dominance and Democracy through a) clarifying the theoretical concepts and how they are related, and b) discussing how these can be best put to work in a number of ongoing case studies on differentiation in Europe.

Some of the changes we have seen in the post-crises EU have had negative democratic effects, thus raising a number of questions worth investigating regarding the relationship between differentiation, dominance and democracy.

The case studies were presented on the first day. The first session of the second day was devoted to theoretical discussion with Andreas Andreas Niederberger, (Universität Duisburg Essen), who provided a comprehensive overview of the notion of dominance from a philosophical perspective. The second session was devoted to the development of the methodological framework.

German dominance in a financial house of cards

Looking at EU monetary and fiscal policy, Southern European member states’ experiences with dominance differ from those of many Northern European ones, as Agustín José Menéndez from the ARENA Centre for European Studies emphasised. Menéndez argued that especially Germany has been dominant in the making of EU monetary policy, implemented through the European Monetary System (EMS). The EMS resulted in national policies, including social policies, with too little regard for internal demands of EU member states. The EMS provided relative stability, but it demanded modelling monetary and social policy after German preferences. The tendency of a ‘de facto German monetary hegemony’ continued with the establishment of the European Monetary Union (EMU), according to Menéndez.

A loss of democratic control and member states’ policy independence

Moreover, Menéndez described how the EU’s financial system developed more and more into a financial house of cards, and when this house collapsed and the Eurozone crisis unfolded, structural shortcomings of an asymmetric European Union were not dealt with. In its place, the power of member states in the fiscal domain became even more limited. Menendez noted that the ‘fiscal rules’ at the core of the constitution of money in the European Union (the inflation target, the deficit and debt ceilings, next to the deficit and debt reduction trajectories) are about a certain way of using numbers in governing, which he refers to as ‘government through numbers’. The purpose is to reduce discretion through numerical knowledge, but the manner in which this is done in the EU leads to increased use of discretion and results in arbitrariness which is closely associated with dominance. The reason is that there is a specific theory on how the economy functions coupled with a normative theory on the proper criteria for the distribution of benefits and burdens.

When differentiation comes as a shock

The EU’s migration policy is a highly politicised and deeply contested subject, which EU3D is committed to investigate. Agreeing on how to reform the EU system on migration and asylum policy is a big challenge for EU member states. Which role do dynamics of domination and differentiation play in this context? Based on her ongoing research, Dia Anagnostou from ELIAMEP (The Hellenic Foundation for European and Foreign Policy) considered the Common European Asylum System (CEAS) another prime example of problematic differentiation.

The EU’s migration policy is a highly politicised and deeply contested subject, which EU3D is committed to investigate.

The migration crisis that unfolded in 2015-2016 became a ‘differentiating shock’, according to Anagnostou. This can partially be explained with path dependency. Differentiation in migration and asylum policy was formally agreed upon and intensified over time, and manifested in the Dublin agreement. Originating in 1997, the Dublin agreement obliges the first state of entry to register and process claims, thereby putting a disproportionate burden on states in the geographical periphery. At the same time, rules do in fact allow for some room for discretion to process claims. The principles of solidarity and fair sharing between member states remain enshrined in the TFEU, but Anagnostou claimed that any sense of shared responsibility in the EU has seriously eroded.

Anagnostou has also found differentiation in the way member states implement common rules and standards, for example when it comes to implementing directives like the Qualification Directive, the Procedure Directive and the Reception Conditions Directive. This supranational layer of asylum rules was supposed to promote harmonisation of common minimum standards. In practice, however, improvements were only marginal with far reaching discrepancies in member states’ asylum laws and policy.

How to move on to democratic reform?

In order to deal with the question of how dominance can be undone through democratic reform, EU3D investigates how differentiation is perceived by society and political actors across the European Union. Magdalena Góra (Jagiellonian University) and Hans-Jörg Trenz (ARENA Centre for European Studies and University of Copenhagen) are investigating this through a series of analyses of parliamentary debates across the EU. At the workshop in Oslo, they presented the operationalisation and research design that encompasses selected news media articles and debates in a number of national parliaments as well as a collection of debates from the European Parliament.