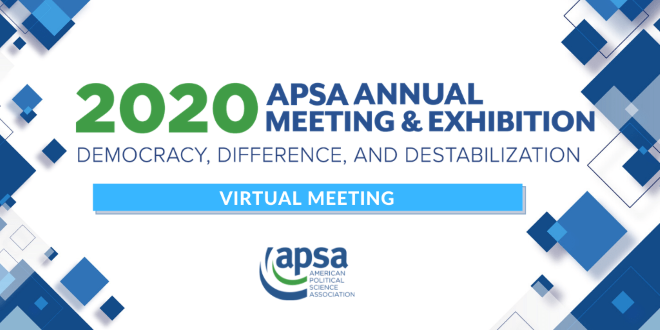 In September, the American Political Science Association (APSA) held its 2020 annual meeting – virtually, due to the circumstances – on democracy, difference, and destabilisation.

Purpose of the panel

In the last decade, the EU has confronted a significant destabilisation impetus of multiple origins and manifestations. That includes the financial crisis and the Eurozone governance crisis; the refugee crisis; the rise of xenophobic and nationalist movements in member states undermining standards of liberal democracy; and Brexit-spurred uncertainty and centrifugal pressures. In addition, the global situation is uncertain, with powerful actors seeking to undermine/weaken many of the international agreements and institutional arrangements that have marked the post-war global order.

The purpose of the panel was twofold: a) to take stock of the present situation and provide a form of ‘diagnosis’ of the current state of affairs; and b) to look for remedying actors and factors.

The panel included contributions that drew on other cases to compare and contrast the EU with, so as to get a clearer sense as to whether the EU’s problems and challenges – and rectifying measures – are unique to the EU or not.

Fabbrini discussed differentiation and federalisation, while Fossum asked if democracy could bounce back:

Sergio Fabbrini – Between Differentiation and Federalisation: Which Model for the EU?

Differentiation has been the answer to the complexity of the process of integration which has taken place in Europe since the 1957 Rome (founding) Treaties. It has been prized as a virtue of the process of integration which could proceed only accommodating the different national preferences and views on that process’s finality. It has institutionalised ambiguity as the necessary form of inter-state relations within the EU. Undoubtedly, it has worked effectively in aggregating a growing number of European states within the same legal framework.

The multiple crises of the 2010s have however called into question the strategy of differentiation, since they raised a sovereignty’s cleavage that is not easily tamed by further differentiating the structure and the functioning of the EU.

Fabbrini’s paper investigates the alternative strategy of federalisation for dealing with the sovereignty’s cleavage. Particularly, it elaborates the features of a federal union’s model aimed to compound member state sovereignty on domestically relevant policies (self-rule) and Union sovereignty on policies of common interest (shared rule). The Conference on the Future of Europe might offer the opportunity for identifying a sovereign union of sovereign states.

The Eurozone and refugee crises and the EU’s reactions to these have had negative democratic effects. During the crises the European Parliament, as well as national parliaments, were often side-lined. Some member states have turned illiberal, having chipped away considerable portions of the legal and institutional arrangements bent on upholding constitutional democracy.

In a sense, then, post-crises Europe has become more democratically differentiated, in that there are significant differences in the character and quality of democratic regimes across Europe (across functional domains at the EU-level, across EU member states, and across regions and local governments in Europe).

Can democracy bounce back? What are the actors and what are the prospects for a democratic restoration in Europe?

Fossum’s paper focus on the restorative potential in popular reactions to crises; the impetus for institutional and constitutional reforms; and external pressures and contingencies. As part of this assessment, he considers the broader question of how to revert to ‘normality’ in the EU, given that the EU is a political experiment.