The European Commission: The political engine room of European integration?

Leading experts will share their analyses of the emerging political role of the European Commission in this online panel discussion, organised by Webster University in Vienna. Moderated by EU3D Professor Jozef Bátora. 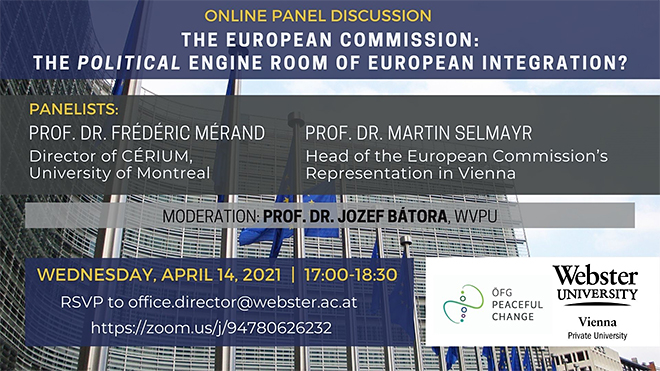 In the course of the last crisis-driven decade, the European Commission led by Jean Claude Juncker has been increasingly taking on an explicitly political role in EU governance. But what does the notion of a ‘political Commission’ really mean? For some, it relates to the presence of a high number of former politicians in the Commission’s top ranks – four former prime ministers, four former deputy prime ministers, and nineteen former ministers. For others, it was about Juncker’s ten-priority program including employment, growth and investment, digital union, energy union, a “more balanced trade policy” and a “new migration policy”. Still, others think of the introduction of more streamlined vertical project teams led by Commission vice-presidents. Finally, for some, the political role of the Commission relates to its ambition to shape its own political agenda and do so even if this means standing up to member states’ governments.