Polish Politics in a Time of Crisis: The EU, Domestic Cleavages and the Future of Europe

Natasza Styczyńska (Jagiellonian University) has contributed with a book chapter on the EU, domestic cleavages and the future of Europe in the book Old and New Cleavages in Polish Society. 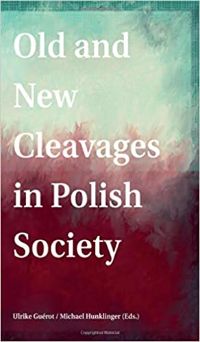 For many commentators of political affairs as well as citizens, the current crisis of democracy in Poland seems to have come as a surprise. This should not be the case, because the warning signs predicting this scenario have been visible for at least a decade. It is unclear whether the crisis over the judicial reform has revealed new divisions in Polish society, especially as the classical socio-political cleavages that political scientists have long analysed in Eastern Europe – such as centre–periphery and urban–rural (Lipset and Rokkan 1967) – overlap with new splits, as well as the effects of such processes as globalisation and economic, political and cultural transformation. In this chapter I argue that in order to understand what is going on in Poland today, we need to look backwards. From the collapse of communism in 1989, European integration and the “return to Europe” were perceived as the main source of stability guaranteeing irreversible pro-democracy changes both in Poland and in the entire region of post-communist Eastern Europe. Above all it was assumed that democracy was what Eastern European societies desired, and it seemed self-evident that they should aspire to such a system and to a free market. The entire process of integration with the European Union took place very fast, without sufficient debate either in the candidate countries or in the existing EU member states. Apart from the symbolic dimension of Europeanisation, the EU exerted on candidate countries, including Poland, mechanisms designed to hasten Europeanisation in all the areas of social, political and economic life. “Stick and carrot” methods were applied to prevent democracy backsliding, albeit not always with satisfactory results. The Europeanisation achieved was often very superficial; laws were implemented, but without any changes to behavioural models or customary rules. The best examples are perhaps the approach to environmental protection or minority rights. The fact that we are now seeing an illiberal turn, as well as delayed transformation fatigue, also results from the tendency of most of society and the political elite to take European integration and EU membership for granted, while integration usually appears in the political debate when the economic dimension of Poland’s membership are being discussed.

Polish Politics in a Time of Crisis: the EU, Domestic Cleavages and the Future of Europe
Natasza Styczyńska

E-mail this page
>
Other relevant publications > Polish Politics in a Time of Crisis: The EU, Domestic Cleavages and the Future of Europe
Twteam@eu3d.uio.no