Sovereignism and its implications: The differentiated disintegration of the European Union 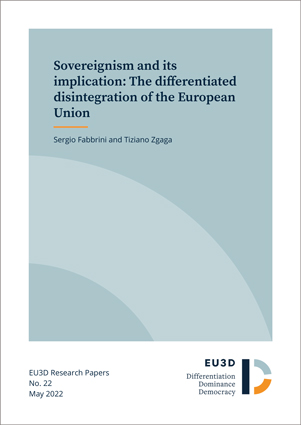 The research paper aims to investigate nationalism in the post-Brexit period (2016- 2021). Because of the political and economic costs triggered by Brexit, European nationalisms have had to redefine their role remaining in the European Union (EU), a necessity made even more stringent by the pandemic crisis and the Russian aggression of Ukraine. We conceptualize as ‘sovereignism’ the attempt to endogenise nationalism in the EU. The research has thus identified commonalities and differences in the sovereignist narrative of western and eastern EU member states. All sovereignists criticized the supranational character (institutional sovereignism) and the centralized policy system (policy sovereignism) which has developed within the EU. However, sovereignists differed on the rationale of their criticism, based more on an economic discourse (economic sovereignism) in western Europe and more on a cultural discourse (cultural sovereignism) in eastern Europe. The sovereignist narrative had clear opportunistic traits, whose outcome, if successful, would lead to the differentiated disintegration of the EU.

By Sergio Fabbrini, Tiziano Zgaga
E-mail this page
>
EU3D Research Papers > 2022 > Sovereignism and its implications: The differentiated disintegration of the European Union
Twteam@eu3d.uio.no