Main navigation
Sub navigation
Publications > EU3D Research Papers > 2021 > Brexit: the sub-national dimensions from the vantage point of the European Committee of the Regions

Brexit: the sub-national dimensions from the vantage point of the European Committee of the Regions 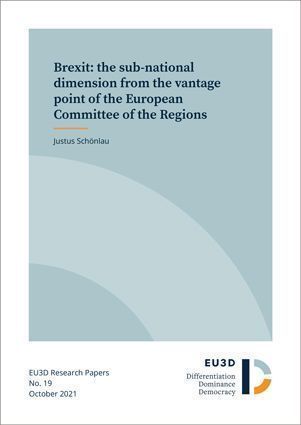 The Brexit process has not just one, but several sub-national dimensions which have not been discussed as prominently as many of the sub-national entities of the European Union would consider necessary. The withdrawal of a Member State, especially of one the United Kingdom (UK) with its very distinct set of relationships between its sub-national components, will affect the dense network of vertical and horizontal relationships that EU membership has fostered between sub-national entities and within the EU institutional system. A net-contributor such as Great Britain leaving also profoundly impacts cohesion policy and thereby risks deepening regional disparities in the EU 27. The European Committee of the Regions has been the champion of the concerns of both EU and UK sub-national levels of governance in the Brexit process and has continuously highlighted the 'asymmetric' and in many cases still unclear effects of this momentous change on the EU multi-level system.

E-mail this page
>
EU3D Research Papers > 2021 > Brexit: the sub-national dimensions from the vantage point of the European Committee of the Regions
Twteam@eu3d.uio.no