The limits of voluntary submission. Dominance frames in Polish parliamentary debates on the EU accession 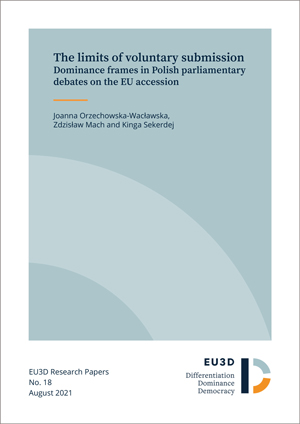 The paper analyses how the imbalance of power between Poland and the EU was perceived, narrated and framed in Polish parliament during Poland’s EU accession process (1991-2004). We take the perspective of a ‘norm-receiver’, a country in an asymmetrically weaker power position, with the intention to analyse the perceptions on dominance and the conditions under which dominance involved in the EU accession process was legitimized at the time of the accession. Conceptually drawing on the works of Max Weber, Pierre Bourdieu, Philip Pettit and Jim Sidanius, in the paper we analyse 24 plenary parliamentary debates on the EC/EU accession, focusing on those parliamentary speeches, which explicitly referred to asymmetry, dominance and power relations. We systematize those interpretations through a matrix of ten interpretative frame packages on dominance, and point towards two divergent types of legitimization of dominance: instrumental and autotelic legitimization. The study’s primary focus is on relationships of dominance analysed through the prism of a candidate-turn-member state. As such the study contributes to the better understanding of a particular country case (Poland), but and the same time, the study’s results might be interesting beyond the specific country case study, contributing to the wider debate on dominance in the EU.