On the search for viable governance in contested federal-type settings: the European Union and Canada compared 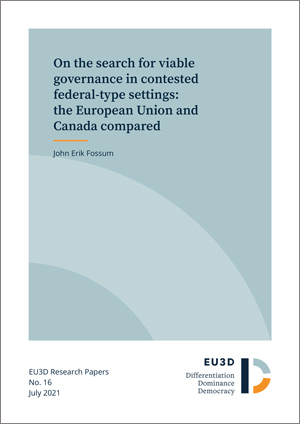 This paper focuses on two contested federal-type entities, Canada and the EU. There is a curious paradox in that both have been depicted as failed (Canada) and as virtually impossible (EU) nation-building projects, but also as vanguards in terms of handling national and other forms of difference and diversity. The first purpose is to substantiate the claim that the two form a distinct sub-category of federation, poly-cephalous federation. Poly-cephalous federation is a more apt term for depicting the EU and Canada (pre- patriation, i.e. pre-1982) than such terms as multilevel governance and multinational federation. The distinguishing features of poly-cephalous federations are a) that they are about an on-going working out of the terms of federal balancing as part of doing the balancing; and b) that those in charge of the balancing are executive officials who set the terms of balancing in systems of summitry with clear parallels to international diplomacy. The executives are heads of states and governments. They represent and control their respective governments and have privileged access to the many tools that modern states have for shaping and sustaining community and identity. It follows that poly-cephalous federations are very prone to executive dominance. The second purpose of the paper is to consider what form of democratic federalism (if any) such a structure may give rise to. The Canadian experience suggests that the main democratic potential in poly-cephalous federations inheres in a viable transition to reflexive federalism (which will be discussed in relation to the post-1982 period). What it is and under what conditions it can be developed is important to establish, not the least because we should consider if there might be a similar potential for the EU, even if its path would obviously be very different from that of Canada.

E-mail this page
>
EU3D Research Papers > 2021 > On the search for viable governance in contested federal-type settings: the European Union and Canada compared
Twteam@eu3d.uio.no