Differentiated (segmented) debate on future of Europe: The views from national parliaments

In this research brief Magdalena Góra, Elodie Thevenin and Katarzyna Zielińska present an overview of the debates on the Future of Europe in 11 national parliaments across the EU and associated countries. 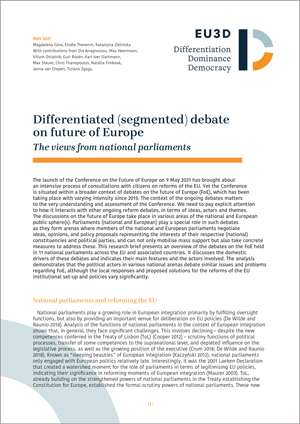 The launch of the Conference on the Future of Europe on 9 May 2021 has brought about an intensive process of consultations with citizens on reforms of the EU. Yet the Conference is situated within a broader context of debates on the future of Europe (FoE), which has been taking place with varying intensity since 2015. The context of the ongoing debates matters to the very understanding and assessment of the Conference. We need to pay explicit attention to how it interacts with other ongoing reform debates, in terms of ideas, actors and themes. The discussions on the future of Europe take place in various areas of the national and European public sphere(s). Parliaments (national and European) play a special role in such debates as they form arenas where members of the national and European parliaments negotiate ideas, opinions, and policy proposals representing the interests of their respective (national) constituencies and political parties, and can not only mobilise mass support but also take concrete measures to address these. This research brief presents an overview of the debates on the FoE held in 11 national parliaments across the EU and associated countries. It discusses the domestic drivers of these debates and indicates their main features and the actors involved. The analysis demonstrates that the political actors in various national arenas debate similar issues and problems regarding FoE, although the local responses and proposed solutions for the reforms of the EU institutional set-up and policies vary significantly.

This research brief presents preliminary findings from EU3D's work package on future of Europe debates. It was written for the policy dialogue event: Conference on the Future of Europe: Vehicle for reform vs forum for reflection.

E-mail this page
>
Differentiated (segmented) debate on future of Europe: The views from national parliaments
Twteam@eu3d.uio.no