The Routledge Handbook of Differentiation in the European Union

EU3D researchers have contributed with chapters in the book the Routledge Handbook of Differentiation in the European Union, edited by Benjamin Leruth, Stefan Gänzle and EU3D researcher Jarle Trondal 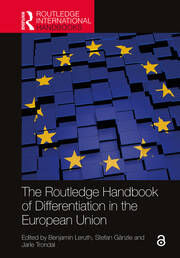 The Routledge Handbook of Differentiation in the European Union offers an essential collection of groundbreaking chapters reflecting on the causes and consequences of this complex phenomenon.

With contributions from key experts in this subfield of European Studies, it will become a key volume used for those interested in learning the nuts and bolts of differentiation as a mechanism of (dis)integration in the European Union, especially in the light of Brexit. Organised around five key themes, it offers an authoritative "encyclopaedia" of differentiation and addresses questions such as:

This handbook is essential reading and an authoritative reference for scholars, students, researchers and practitioners involved in, and actively concerned about, research in the study of European integration. As European differentiation is multifaceted and involves a wide range of actors and policies, it will be of further interest to those working on countries and/or in policy areas where differentiation is an increasingly relevant feature.

This chapter critically takes stock of methods and data sources used in the study of differentiated integration (DI). We first catalogue and exemplify prominent methods of DI research, before quantitatively tracing the usage of these methods over time. The analysis of a DI bibliography, spanning the period 1995–2020, reveals that DI predominantly has been a playground for qualitative research in the past. However, more recently, an upsurge of methodological pluralism becomes detectable in our data. We take this as an indication for a growing maturity of the field. Before concluding the chapter, we briefly introduce and discuss a number of datasets that are already used, or that may potentially be useable, in the study of DI.

3. On the Legitimacy of Differentiated Integration

Differentiated integration (DI) is a puzzle from the point of view of legitimacy. On the one hand, DI is associated with illicit rule as people are subjected to laws, the making of which they cannot influence on an equal basis. Under circumstances of far-reaching legal, administrative and economic integration, DI entails arbitrary rule, viz. dominance t; it undermines the fundamental conditions of democratic self-rule. Some forms of DI are in breach with the principle of equal membership in a self-governing republic. On the other hand, DI allows for cooperation even when there is disagreement and when mutual dependence is unequal. DI enables cooperation in specific fields, lowers transactions costs and reaps some of the benefits of European public goods. In order to square this circle, I derive an indirect legitimation theorem from Kant’s category of permissive law of public right. This theorem comes with a time and knowledge index, which ties the legitimacy of DI to the level of knowledge and to a particular point in time. This theorem establishes conditions under which DI would enjoy the presumption of being legitimate. Differentiation in this perspective is not perceived as a threat to the European project, but rather as a vehicle of integration.

12. Differentiation in the European Parliament

This chapter explores how Members of the European Parliament (MEPs) approach differentiation. Differentiation in the European Union (EU) has often been described and discussed as a matter for member states to accommodate their various concerns whilst being able to progress the integration process. At the same time, differentiation has broad implications not only for member states, but also for EU’s millions of citizens. Integrating measures of different speeds and an array of complex formats, as well as possibly dis-integrating processes, triggers questions about cohesion and governance, but also about social support and the very existence of the EU. Being directly elected by the EU citizenry, it is the role of MEPs to voice the viewpoints of their constituents. Therefore, this chapter will address how MEPs experience and evaluate processes of differentiation. Although the European Parliament has proclaimed that the debate about differentiation should not be about pro-differentiation versus anti-differentiation, this chapter demonstrates that MEPs have opposing visions of the future of the EU, and they evaluate proposals for differentiation differently. The analysis shows how MEPs view the issue of differentiation as closely connected to the question of democracy in the EU. However, it is identified as both a remedy to lack of democracy, and as a threat to it.

15. Differentiation and the European Court of Justice

The aim of this chapter is to analyse the place of the European Court of Justice (ECJ) in the increasingly differentiated political system of the European Union (EU). If a constitutional court’s role such as the ECJ’s is to guarantee the homogenous application of law in a political system, is increasing legal and judicial differentiation blocking its actions? The chapter starts with distinguishing two main sources of differentiation in the legal and judicial realm of the EU. First, differentiation results from the resistance of national courts towards the constitutionalization of European law, which led to constitutional pluralism. A second source of differentiation is linked to the fact that national governments have departed from the notion of a European rule of law homogenously applied on the EU territory, introducing specific types of differentiation – vertical and horizontal – with the aim to offer the member states’ way out of a negotiating deadlock, and/or preserve member states sovereignty. Confronted with these dynamics, the Court has actively developed instruments to restrict legal and judicial differentiation through its activism in fields where its competences are limited at best and through the establishment of the sociological instrument of judicial dialogue. Using approaches stemming from legal, sociological as well as network studies traditions, this chapter shows that while legal differentiation is indeed increasing, the ECJ has reacted in order to keep this process at a minimum.

27. The Nordic Countries as Pioneers of Differentiation

E-mail this page
>
EU3D books and articles > 2022 > The Routledge Handbook of Differentiation in the European Union
Twteam@eu3d.uio.no