The proposed EU-UK partnership agreement as a Canada style agreement 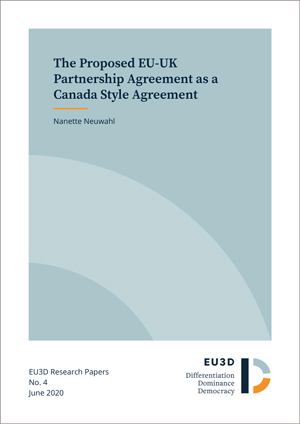 This paper looks into the question of differentiation in EU foreign policy. While negotiations between the EU and the UK on their future partnership are ongoing, clarity is sought on questions such as: Does the draft agreement proposed by the EU’s chief negotiator fall within a familiar differentiation track? In particular, is it a ‘Canada style’ agreement rather than ‘Norway style’ agreement? To what extent is it an attempt to nudge the UK into conformity with EU regulation? Does the proposed agreement show that ‘geography matters’?

We will see that in many respects, the proposed agreement resembles a deep trade agreement like the one with Canada. It gives the UK the opportunity to take back much more control than under a Norway style agreement. The flavour is ‘freedom to legislate’, subject to some red lines, including the requirement of a level playing field, alignment of Northern Ireland (laid down earlier in the Withdrawal Agreement) and human rights protection.

Does ‘geography matter’? The requirement of a level playing field suggests it does. Meanwhile, in a typology of international agreements, deep trade agreements have their distinct place. Their features allow parties to build a meaningful partnership while keeping a fair amount of control. This paper points to parallels between the Barnier draft and such an agreement.

The sovereign equality of the UK is respected at every stage of the coordination process. At no instance does the draft propose a hard obligation for the UK to accept stricter environmental and health standards on its territory. It only provides for the EU to be able refuse access to its market of goods and services that do not respect EU standards. The respect for the Northern Ireland protocol of the Withdrawal Agreement, and for human rights are the principle conditions.