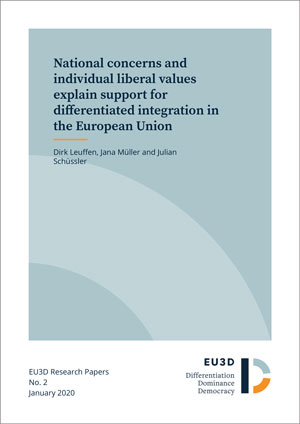 Research on the extent and causes of differentiated integration in the European Union has burgeoned in recent years. However, we still know little about citizens’ attitudes towards the phenomenon. In this article, we argue that both country- and individual-level factors should affect support for differentiated integration. Specific­ally, building on the difference between exemptive and discriminatory dif­ferentiation, we expect citizens of Southern member states to stronger oppose and those of Northern and Eastern member states to support the concept of a ‘multi-speed Europe’. On the individual level, we expect general attitudes towards politics and society to matter. Survey data largely corroborates our expectations: Support for differentiated integration is indeed much lower in Southern Europe. On the individual level, we find that supporters are highly educated and marked by liberal-conservative attitudes. In contrast to general EU support, we do not find robust correlations with socio-demographic variables.